This past year much of my time has been spent as the teaching assistant for the senior Game Design Studio course here at UCSC. The course is a year long project sequence, which serves as the final year capstone for the game design undergraduate major. This is the 10th year it has been run, and the second that I was involved. In small teams (this year they ranged from 2-9 students, plus external artists and musician) students spend the entire year working together to produce a substantial videogame. It was both a marathon and a sprint, occassionally feeling like it would never end but over much to quickly now that it has. I was priveleged to work with 10 incredible teams, on games ranging from a mixed reality game about raising the dead to a mobile game about birds pooping on people. In this post I’ll describe some of the details of the course and reflect on my experience as part of the instructional staff.

UCSC is on a quarter system. Fall, Winter and Spring are the main academic quarters, each lasting 10 weeks. For the Fall, all 90 students in the class pitched 3 game ideas in their discussion section. With feedback and critique from the TAs, they each picked one to take to the next level, producing a non-digitial prototype. This prototype was playtested, which informed the next step: their computational prototype. All of this work led up to the “green lighting” process in which these 90 proposals were trimmed down to a more manageable number which would proceed into production during Winter and Spring.

The greenlight finalists were selected by the instructional staff, cutting the field in half. These finalists then publicly presented their pitches to a panel of judges, some from the games industry and some UCSC faculty. The pitches were streamed online for alumni and friends of the program to watch, and were open to the public in UCSC’s several hundred seat media theater. This was the first example of one of the major themes of the entire year: polish and professionalism. While there were certainly challenges with the greenlighting process (and it will be iterated on next year, as always) the pomp and circumstance of getting on stage infront of several hundred people and presenting your ideas to other professionals in the field raised the stakes significantly. Throughout the sequence Jim’s attention to these details of staging and presentation made the course feel like more than just another class.

Finally, after much deliberation, we had our list of greenlit games! During the last week of the quarter there was an interview process by which the lead designers interviewed classmates and recruited teams. And so concluded the Fall, with teams formed and eager to get started on their games.

In many ways Winter quarter is the toughest but might be the most rewarding. This is the quarter where I really got to know individual stduents, their games and the team dynamics. At the beginning of the quarter the games are just small prototypes and big dreams, but 10 weeks later something like a game had sprung into existence.

During the Winter the TAs job is mainly to meet with teams each week. I had 10 teams and James had 9. This meant quite a lot more meetings than I was used to (although nothing compared to the meeting schedules of full professors) and stretched my time management abilities. Each team also had a meeting with Michael every other week during which he dug deeply into the designs, with a particular knack for identifying systems that needed a second (or third, or fourth) look. Our meetings varied, but each included a progress checkin followed by some discussion of whatever their most pressing technical or design issue was that week. Unlike the Fall these meetings involved significant and difficult design work, which often pushed to the edge of my knowledge and abilities. It was fun, tiring, intense work.

Hanging over each team was the implicit threat of being cancelled. The professors reserved the right to terminate games which they felt were not working out for whatever reason, whether scope, interpersonal conflict, lack of direction, or anything else where they feel the students would be better served working on different games. There were two major deadlines in this quarter: core loop and first playable. The core loop, due about halfway through the quarter, required that the basic interaction loop of the game was in place and it was possible to conduct preliminary playtesting. At the end of the quarter, first playable required a higher level of completion, with essentially the entire game present in some draft form. Despite the crunch and stress that this final deadline caused some teams, ultimately none were cut. With a sigh of relief, everyone took off for spring break, coming back rested and ready to finish off the final quarter.

The spring is playtest, polish and publish time. For some games there was more fundamental work left, but the majority had a basic experience ready to improve the small details or iterate on level design or balance. This quarter Jim and the TA met with each team each week. By this point I was approaching burnout and there were definitely weeks I was no entirely there. (Apologies to any of my students reading this, but TAs are imperfect sacks of flesh and blood just like you!) There were two culiminating events to this quarter I want to highlight which reinvigorated me (and prompted this reflection).

The year has traditionally been capped off with “The Sammys Award Show” held in town at the historic Rio Theater. Again, the department brings in industry judges to play the games and select winners in several categories. In the past, on the afternoon of the show the judges would come into the gamelab on campus, play the games and then send the results over to the theater. This was always hectic, and as the class has scaled up the lab has become more and more crowded. This year we did something different, which felt like a much better capstone event. 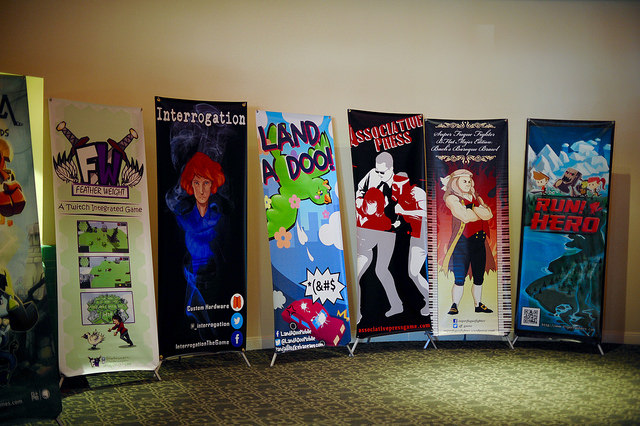 The First Annual Sammy Showcase was held at the UCSC Silicon Valley extension campus and was a resoundign success. All 19 undergrad games, the games made by the professional masters students and several games from my PhD colleagues were shown off. The industry judges got some time alone with the games, but then it was open to the public. The event was challenging to set up (my part was only moving computer equipment; I can only imagine the other logistics involved) but so worth it. Each team had a large banner to place next to their demo station and business cards, postcards or stickers to hand out. It was truly rewarding to see these games displayed and played so professionally. There was an incredible energy at the event, and I believe every student I spoke to was excited and invigorated (and exhausted) by the attention they received.

The judges chose their finalists and so, a week later, we arrived at the Rio eager to hear the winners. James and I purposefully chose not to hear the results ahead of times, and it really was dramatic and meaningful to the teams. A hearty congratulatiosn to all the teams for finishing, but especially to the overall winner Project Perfect Citiizen. 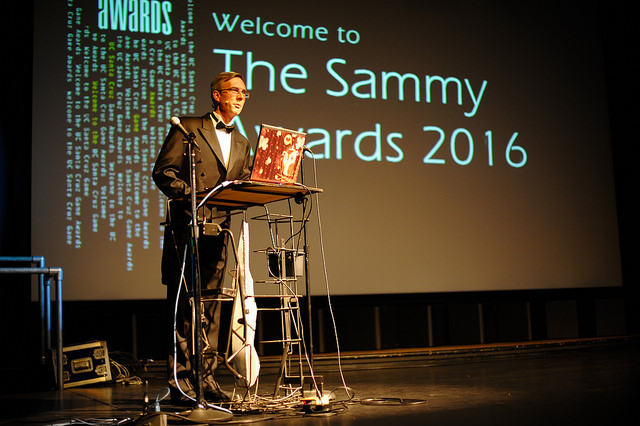 These two events combined to make the (exhausting) end of the quarter feel like a celebratory climax instead of a stumbling across the finish line. Had I been in charge I am certain I would have held at most an open lab day on campus. Instead, through the genius and hard work of Jim Whitehead, these student games were escalated into something more. While the bulk of the year’s learning would have been the same without these events, I hazard a guess that more students will feel energized to keep polishing and adding to their projects after the year ends. Additionally, the exhibition experience will be valuable, as several of our teams have submitted to Indiecade and several more will be presenting at an Indie showcase event adjacent to E3 this weekend. All of the downlaodable games can be found on itch.io in this collection and I encourage you to try them out!

This was a long year, but I’m feeling very good about it right now and maybe crazy enough to sign on again next Fall when the whole thing starts up again…